This demonstration site covers coastal ecosystems on both the Western and Eastern Cape York in far north Queensland. 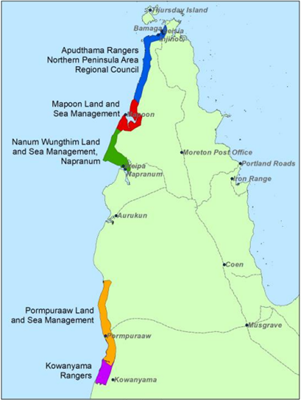 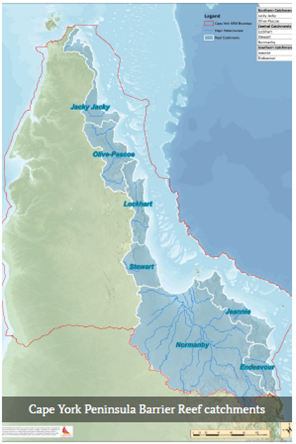 The WCTTAA is a partnership of five Indigenous Ranger groups from Pormpuraaw, Napranum, Mapoon, Northern Peninsula Area, and Kowanyama, who are working together, at a regional coordination scale, to protect threatened and endangered marine turtles along the western coast of Cape York. The alliance was formally established in 2013.

The management strategy adopted by WCTTAA has been to continually assess and adapt predator control activities to build on results from the previous year and identify approaches that are as cost-effective as possible. The success of the Western Cape program is measured by the survival rate of turtle nests on the target beaches.

Through this program, the Rangers aim to build capacity within their groups to conduct the work. The WCTTAA Coordinator supports the Ranger groups with annual planning, reviewing predation data, and location of predators relative to the turtle nesting locations.

Annually, all of the Alliance groups meet together in person to share knowledge and discuss approaches, challenges, and outcomes achieved.

More details from their program can be found at Western Cape Turtle Threat Abatement Alliance.

The Catchments to Coral—Great Barrier Reef Coastal Ecosystems and species protection project on eastern Cape York is funded through the Australian Government’s Reef Trust from 2021 to 2023.

Over 80% of the coastal ecosystems of eastern Cape York are either Aboriginal freehold or Cape York Peninsula Aboriginal Land, jointly managed by Queensland Parks and Wildlife Service. Capability and capacity building of Indigenous land managers is a key focus of this program. Cape York Indigenous land managers and communities are being funded through this program to protect the high ecological catchment and coastal values.

Adaptive feral pig management strategies and monitoring systems that have been developed, trialled, and successfully used by Indigenous Rangers on the western Cape to reduce turtle nest predation are being applied on the eastern Cape.

The mission of the WCTTAA is to be ‘a partnership of on ground land and sea owners and managers, formed to set priorities, seek solutions and share knowledge to maximise the use of resources for coastal management on Western Cape York’.

The WCTTAA seeks to efficiently manage threats to coastal habitats and enhance opportunities for these nesting marine turtle populations from the Mitchell River to Pajinka. The Catchments to Coral project, funded by the Australian Government’s Reef Trust, commenced in July 2021 and is due to be completed in June 2023.

The objectives of this site are to replicate the establishment of a network of the groups/ organisations/ individuals conducting feral pig management activities on Country in eastern Cape York, as implemented on western Cape York. The Catchments to Coral project will support and coordinate efforts of Indigenous rangers to improve efficiency and effectiveness of feral pig management activities, and share and distribute resources to priority areas.

The Indigenous land and sea managers involved in WCTTAA are:

Methods of control being used

WCTTAA members coordinate the timing of their aerial culls on Western Cape York to share the costs of conducting aerial shooting along this remote coastline. These aerial programs are usually run twice a year, before and after peak turtle nesting season.

Aerial pig control along the eastern Cape York coastline between Cape Melville to the south and Escape River in the north are conducted twice a year, before and during peak turtle nesting season. The aerial control program targets pigs foraging along beaches at dawn and dusk, as well as those inhabiting adjacent wetlands and sensitive vegetation communities during the day.

A target nest predation rate of less than 30% is the maximum allowable clutch loss required for population sustainability.

The presence of rangers on beaches and the installation of purpose-built nest protection cages contributes to the reduction in predation and increased turtle hatchings. Innovative technology to monitor outcomes on protected assets and values

There are many learnings for other management groups from the innovative approaches being used by Indigenous Rangers to collect, report and use data to monitor outcomes on protected assets and values.

These include the technology solutions developed through National Environmental Science Program funding, in partnership with Aak Puul Ngantum and Kalan Enterprises, in the Archer River basin to enable Indigenous Rangers to easily measure and report on the impact of their management actions to Traditional Owners and to funding agencies of land management programs.

WCTTAA is supported by Cape York NRM, with funding from the Nest to Ocean Turtle Protection Program, a joint initiative of the Australian and Queensland Governments.

The Catchments to Coral—Great Barrier Reef Coastal Ecosystems and species protection project on Cape York is funded by the Australian Government’s Reef Trust. It commenced in July 2021 with funding currently to June 2023.

Figures, photos and maps have been supplied by Cape York NRM and WCTTAA members.